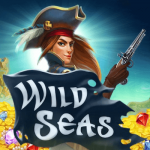 The Wild Seas Slot is an ELK Studios slot with five reels, three rows and 178 ways to win. The game has a fantastic pirate theme and from 20p you can spin the reels. The maximum bet is £100. The slot is fully compatible on smart phones, tablets and also from the desktop playable. There are two important bonus features at Wild Seas Slot. It’s the Break the Convoy feature and the Loot the Treasure feature. In addition, wilds, Sailing Wilds and Sticky Wilds land on your reels bonus. In short, the Wild Seas has a lot to offer and the top prize is no less than £178.000! 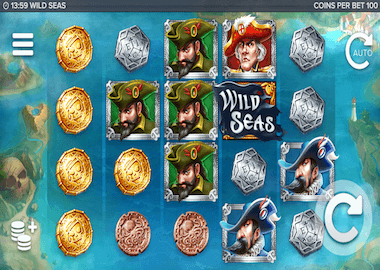 Symbols and Payouts: ELK Studios has given the Wild Seas slot a manageable number of symbols. There are three different coin symbols (bronze, silver and gold) and four different pirate captains. The coins will pay you up to 100x your bet for a combination with 5 symbols. Among the pirate captains, the female pirate is the most valuable. She pays you up to 1000x your bet. In addition to these symbols, there are also 3 different Wild symbols, a barrel which explodes and the pirate ship which attacks symbols on the same row.

Break the Convoy feature: The Break the Convoy feature starts when you land two Wild Seas symbols on reels 2 and 4. Then five Wild Ships will appear on your 5th reel. These start sailing towards reel 1. With every spin you can now get valuable treasures. But beware: on reel 5 the pirate ship will appear, attacking your wild ships on the same row. If the pirate ship has sunk all your wild ships, the feature will end or you will then launch the Loot the Treasure feature.

Loot the Treasure feature: The Loot the Treasure feature always starts after the Break the Convoy feature. When the last Wild Ship has been sunk, the Wild Chest icon appears on reel 2, 3 and 4. These Wilds are Sticky Wilds and remain in the same position throughout the feature. It substitutes all symbols exept the barrels. If more Wild Chests land on the reels, they will be converted into additional Sticky Wilds. The feature does not end until the pirate ship has destroyed a barrel.

Where you can play the Wild Seas Online Slot

The Wild Seas slot has no traditional Free Spins feature. But the Break the Convoy and Loot the Treasure feature are much more interesting. If you play both features, you’ll get some massive winnings. You can test the wild seas slot here right here (click on the banner above). ELK Studios has already released similar games, such as the Wild Toro or the Taco Brothers slot. You can find even more free ELK games here. The table below also includes UK licensed ELK Studios casinos. The top recommendation here is the Rizk Casino where you can play 50 Free Spins on Netent Slots.