Playtech has released another DC Comics slot, The Dark Knight Online Slot. The 6 reels slot with 50 paylines is just like its many predecessors DC Comics a top game. With Batman vs Superman Dawn of Justice, Green Lantern, Justice League, Man of Steel, Superman or Batman Begins, they developed very good games. Of course, The Dark Knight slot is also connected to the DC Super Heroes Jackpot. So you can win the Mini Jackpot, the Minor Jackpot, the Major Jackpot and the Grand Jackpot!

Symbols and payouts: Playtech did not spend too many symbols on this game. There are only the playing card symbols Q, K and A and 6 character from the movie. They are Rachel Dawes, G Gordon, Gary Oldman, Aaron Eckhart and Bruce Wayne. The Joker symbol and the Batman symbol are bonus symbols and also land as Stacked Symbols on your reels. The Joker pays 35x your bet and the batman symbol 75x your bet on a 6 combo. The Bat is the Wild symbol. It substitutes for all symbols exept the 2 bonus symbols and appears on reels 2 through 5. 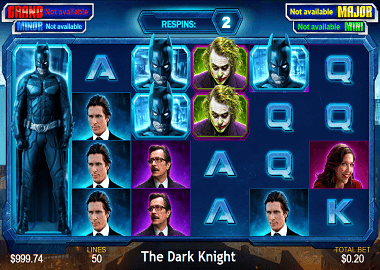 Batman Respins feature: The Batman Re-Spins feature is triggered when the Batman icon lands on reel one as a stacked symbol. Within the feature all Batman and Bat Wild symbols are locked on the reels. After every spin a coin is thrown. If it shows Batman you get another free spin and if it shows the joker the feature ends. Overall, you can get 8 re-spins.

When the Joker bonus symbol lands on reels 4 and 5, you play the Agent of Chaos feature. Finally, if you get both bonus symbols at the same time (Batman on reel 2 and 3 plus Joker on reel 4 and 5) you trigger the Gotham City feature. With each feature you get 7 free spins each.

Joker Respins feature: The Joker Re-Spins feature at The Dark Knight Slot is just like the Batman Re-Spins feature. This time, however, it is triggered with the wild symbol stacked on the 6th reel. Again, the coin decides how long you collect wild symbols Joker. When the coin shows the Batman symbol the feature ends, at the latest after 8 Re-Spins.

Where you can play The Dark Knight Slot