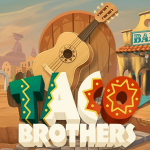 The Taco Brothers Slot comes from the Swedish company ELK Studios. It is one of the young companies that want to annoy the big manufacturers like Netent or Microgaming with their slots. With the Taco Brothers Slot, the ELK has definitely succeeded. The game is about the three Mexican brothers Paso, Pepe and Pico. The three rob a bank and are pursued by the sheriff who wants to lock Paso, Pepe and Pico in jail. Of course, the brothers are playing for you, which means if you get big profits, the bank robbery was successful. 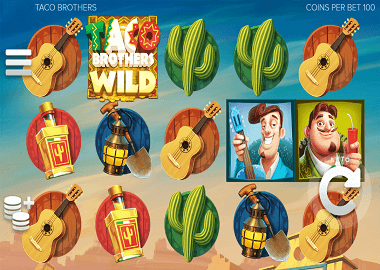 Of course, the developers at ELK donated the Taco Brothers a nice bonus round. In addition, the game overshadows but especially with its beautiful symbols. The fact that ELK has invested a lot of work in the design of the games is also evident in the Taco Brothers slot. In general, ELK Studios is known for developing high quality games. About the features of Taco Brothers:

The best symbols are the three brothers Paso, Pepe and Pico. Also with 3er combinations you already make profits. Other important symbols are the vault, which is your scatter, a wild symbol and the Taco Brother Respins symbol. If this symbol lands on your reels, you will receive a free respin. The wild symbol replaces as usual all symbols except the vault symbol.

Free Spins Feature: Activate this feauture if you get 3 vaults. These must appear on the reels 1,3 and 5. After that, a bomb will explode and you will see which win multiplier increases your winnings in the Free Spins feature. If you play now, two more symbols are important: Captain Diaz and the lovely Señorita.

Where you can play the Taco Brothers Slot

The Taco Brothers slot is undoubtedly very entertaining. ELK Studios publishes 4-5 slots a year. ELK Studios is known for making all games compatible with mobile devices. For this reason, the “Play” button is also on the reels what is certainly unusual for some players. The Taco Brothers Slots is also a 243 winning ways game. This means that you will make many small wins in the base game. These can also be under your initial bet.

We also offer some of the best ELK Studios slots on our Free Slots site. You can also play the Taco Brothers slot here (click on the banner above). Like all ELK Studios slots, the game is also licensed for the UK market. You can play the Taco Brother in the online casinos below. As always, there are some nice bonuses for you when you sign up. Use your advantages as a new player and play with free bonuses and bonus spins on selected slots.