Taco Brothers Christmas Slot by ELK Studios is a five reels slot with three row and 243 ways to win. The game based on the Taco Brothers slot with a higher level of volatility. The focus is again on the brothers Paso, Pepe and Pico and their opponent Captain Diaz. The Taco Brothers Christmas Slot is all about the Wild Escape bonus feature, where the brothers as Wild Symbols make big profits for you. You can play this wonderful ELK Studios slot on all devices including Android and iOS Smart Phones. The minimum bet is 10p and you can bet up to £ 50 per spin. 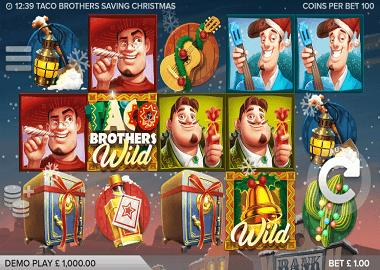 Symbols & Payouts: The icons of the Taco Brothers Christmas Slot are all theme related and designed in a very nice Carton style. In addition to the brothers Paso, Pepe and Pico, there is also the Taco Brothers Wild Symbol, the Safe Scatter Symbol and a normal Wild Symbol. Pasco is the most valuable symbol and pays you up to 400x your bet. Low Paying symbols are a cactus, a guitar, a bottle of rum and a scoop. With these symbols you can win up to 80x your bet with a combination of 5 symbols.

Re-spins feature and Wilds: In the base game you will be helped by two important symbols which will give you progressively smaller winnings. It’s the Wild Symbol and the Taco Brothers Wild Symbol. The latter symbol is not a simple game, but triggers a re-spin if you land at least two of these symbols on your reels. In addition, you can collect in this way three safe symbols that trigger the Free Spins feature. The normal wild symbol, on the other hand, replaces all other symbols except the safe symbol and the taco brother wild symbol.

Wild Escape bonus feature: The Wild Escape Bonus feature is one of the best feature we know. As mentioned earlier, you need to land three safe symbols on reels 1, 3 and 5 via the Re-spins feature. Then a bomb explodes and you see a multiplier for your Free Spins. During the free spins, the Taco Brothers act as wild symbols, moving from right to left across the reels. Only Captain Diaz can stop the brothers and put them in prison and his daughter the Senorita can release the imprisoned brothers. The feature ends when all three brothers are locked up or all have escaped.

Where you can play the Taco Brothers Christmas Online Slot

The Christmas version of the Taco Brothers slots is even better than the original. Now it’s even more exciting due to the higher variance of the game. Other top games from ELK Studios are the Wild Toro Slot (also with a Mexican theme) or the Electric Sam and Sam on the Beach Slot. You can play all ELK Studios slot here for free. Or click the banner above and spin the reels from the Taco Brothers Christmas slot. Good ELK Studios online casinos are the Oreels Casino, Guts Casino or the Casimba Casino. Sign up there and you receive 10 Free Spins without deposit!