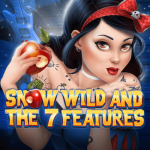 The Snow Wild and the 7 Features Slot is a 20 payline video slot with five reels and three row. The game comes from Red Tiger Gaming and has, as the name suggests, 7 bonus features. The set of the Snow Wild Slot is a bar and from time to time the guests of the bar will appear next to your reels. The most important thing is the 7 different bonus features which guarantee good entertainment all the time. From 20p you can play the Snow Wild and the 7 features on all devices including Smart Phones and Tablets. The maximum bet is £500! 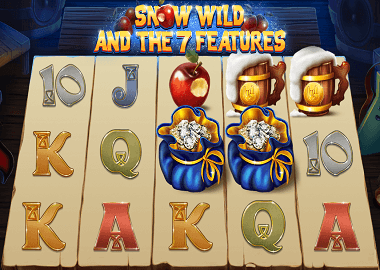 Symbols and Payouts: The symbols of the Snow Wild and the 7 features are in cartoon style. You have low paying playing cards symbols which pay up to 72x your bet. The theme related icons are a apple half eaten, a stone of beer and a pouch of diamonds. The last mentioned symbol has the highest payouts namely up to 300x your bet. There are also two different wild symbols, the Bar Keeper and the Beer Foam, which pay up to 600x your bet.

Bonus Reels: The bonus reel you have to trigger to play one of the 7 different bonus feature of the Snow Wild Online Slot. You have to land the tattooed Snow Wild Symbol (the Woman) on your reels and if she sends 3 kisses towards reels, you trigger the Lucky reel. Now you can play one of 7 features. The Boozy Feature, Goldi Feature, Dozy Feature, Sneaky Feature, Tickly Feature, Flash Feature and Crazy Feature are available on the bonus reel.

The Boozy Feature: Here you have to land the spinner on Boozy and he’ll open the beer taps which converts the whole reel wild.

Goldi Feature: When you trigger this featureshakes Goldy a bucket of coins above the reels and delivers an instant cash prizes.

Dozy Feature: Dozy is sick and is having a nap. If he snores, he blows symbols around your reels to create new winning combinations.

Sneaky Feature: Sneaky is the next charakter and he gets out his saw and chop up yours reels. Now you get new reels winning combinations.

Tickly Feature: Tickly is responsible for respins. He sneezes on your reels and triggers re-spins and sometimes even multiple re-spins.

Flash Feature: Lightnings strikes your reels when Slash plays his electric guitar. He blast off the symbols and replaces them with new ones.

Crazy Feature: Crazy man drags symbols off the reels and replaces them with new ones. New guaranteed winning combination are the result.

The Snow Wild and the 7 Features slot is very entertaining. Once you have activated the bonus reel, very good winnings are already guaranteed. Play Snow Wild and the 7 features here for free. Click on the slot banner above and the game starts in a new window. Do you wanna play with real cash?Recommended Red Tiger Gaming casinos are the Slot Boss Casino or the Castle Jackpot Casino. There you can play £ 10 for free! Just open your player account and test the casino and the slots without risk. More free Red Tiger Gaming Slot can be found here in the Red Tiger Review. 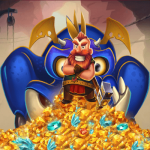 The Treasure Mine Slot from Red Tiger Gaming is a five reels slot with four rows and 40 paylines. The slot theme is a gold mine and your job is to mine as much gold as you can. Some wonderful bonus features will help you. These include the Treasure Run feature and three Wilds: Dragon Wild, Treasure Strike Wild and Redbeard Wild. You can win up to 1000x your bet at the Treasure Mine Slot. The minimum bet is 20p and the maximum is £500. This means that you can win no less than £500.000 in top prize! 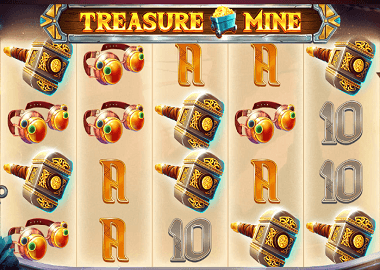 Symbols and Payouts: The Treasure Mine Slot is simple and very effective. You play here with the playing cards symbols 10, J, Q, K and A. These symbols are the low Paying symbols with up to 120x your bet for a combination with 5 symbols. The theme related symbols are a goggles, an oil lamp, a base cap and a gold gavel. The last symbol pays up to 240x your bet. Only the golden wild symbol has even better payouts: here you win 320x your bet with 5 symbols.

Wild Symbols feature: There are 3 Special Wild symbols on the Treasure Mine slot: Dragon Wild, Treasure Strike Wild and Redbeard Wild. Each time at least 2 of the Wild symbols land on your reels at the same time, one of the following features is triggered.

Dragon Wild feature: Dragon Wild: When the Dragon Wild and the Redbeard Wild land on their reels in the same spin, Redbeard get scorched by the dragon. He flees and leaves a trail with new wild symbols on your reel.

Redbeard Wild feature: In this feature you have to land the Treasure Beard Wild and the Treasure Strike Wilds turn up on your reels. Then Redbeards leaps on the treasure and collects winning for you as much as he can.

Treasure Run feature: The Treasue Run feature is the bonus round at the Treasure Mine Slot. You trigger the feature with three of the Gold Carts. Now Redbeard jumps into one of the gold carts and drives through the gold mine. During the ride, he collects gemstones for you and everyone means a prize for you. With this feature, you can win up to 1000x your bet – the top prize at the Treasure Mine Slot.

Where you can play the Treasure Mine Slot

The Treasure Mine Slot is available in some reputed UK online casinos. The MCasino or the Slot Boss Casino offer you free bonuses to get started. More recommendable slots can you find below in the table. If you want to play the Treasure Mine slot for free, just click on the slot banner above. Other great Red Tiger Slots are Elven Magic, Reel Heist or Esqueleto Mariachi. All Slots you can play with us for free and without registration. 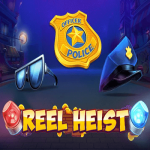 The Reel Heist Slot by Red Tiger Gaming is a fun cartoon-style online slot. When you spin the reels it’s about a camp looking cop catching some robbers. But not every robber is worth the same money. The biggest reward is no less than 2000x your bet – when the right thief lands on your reels. Red Tiger Gaming donated the Reel Heist slot 5 reels with 40 paylines. The software developer dispenses with this game on time-consuming bonus feature, only the Cops and Robbers hunting is in the focus when you spin the reels. 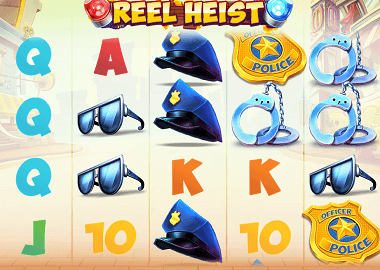 The Wild Cop and Robbers: It’s certainly not easy to make a slot really interesting without a free spins or bonus feature. But the developers of Red Tiger Gaming have succeeded! The Cop and Robbers Hunt can start any moment you spin the reels. The cop is your wild symbol – he does not pay any winnings, but replaces all the other symbols on his reels. Now it is important that a robber lands on the reel, because then the hunt begins. With every spin the cop can get closer to one of the robbers. If you land side by side on the reels with both symbols, you will get a bet multiplier of 32, 64, 80, 128 or 2.000 times!

Where you can play the Reel Heist Online Slot

You can play the Reel Heist online slot from a bet of only £0.20. The maximum bet is not less than £500. This also means that you will become a millionaire with a lucky spin – the top prize is £1 million. But do not make big bets before you do not know the slot really well. You can play the Reel Heist here for free as long as you feel like it. Open the game by clicking on the banner above. If you want to play with real money in online casinos, we have some good recommendations. In Slotboss Casino or Castle Jackpot Casino you even get a no deposit bonus. Even more fantastic slots from e.g. Play’nGo or Yggdrasil are also in the selection of the online games.