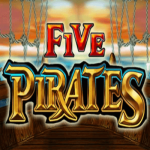 The Five Pirates Slot is a five reels Lightning Box Games Slot with four rows and 1024 ways to win. The slot has a pirate theme and in addition to playing cards symbols land in front of all pirates on your reels. From 50p you can spin the reels of the Five Pirates Slot up to a maximum bet of £ 350. The Five Pireate Slot offers some very good bonus features that will help you to make big prey on the oceans. These include a Hold and Spin feature and the Pirate Barrel Bonus feature with free spins and multiplier payouts. 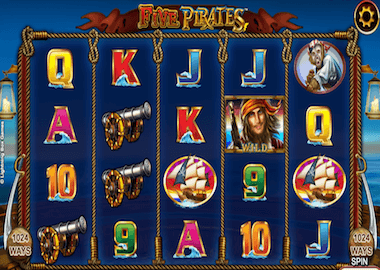 Hold and Spin feature: The Hold and Spin feature comes with two lucrative bonus features. When 2, 3 or 4 Skull Scatter symbols land on your reels from left to right, you trigger the feature. You then get 3 re-spins in which you have to collect more skull scatters. The remaining reels spin and with luck you can land a scatter symbol on each reel. If you succeed, you will start another feature, the Pirate Barrel Bonus feature. That’s the main feature of the game! Here you can collect Free Spins with multiplier payouts.

Pirate Barrel Bonus feature: With the Pirate Barrel Bonus feature you can trigger the biggest profits of the Five Pirate slot. First, climb the top of the barrels to get the most and most lucrative Free Spins. You have five different pirates to choose from and each has a different Free Spins option. The selection of combinations ranges from 15 free spins with up to 15x mulipliers. During the feature, you can also trigger the Hold and Spin feature again. This gives you the chance to play 14 free spins with 15x multipliers. This greatly increases your chances of winning top prizes!

Where you can play the Five Pirates Online Slot